Jonathan Sarty is a native of New England and founder of the White Mountain Boys, the Jonathan Sarty Band, and the popular Cold River Radio Show (hosted by Jonathan and his renowned Cold River Radio Band). He is an accomplished producer, promoter, songwriter, recording artist, and performer with an extensive musical repertoire covering a variety of genres. Appreciated for his own adaptations of Classic American Hits and known for a great voice and stylistic versatility, Jonathan entertains audiences of all kinds throughout New England and beyond. He has developed his repertoire through decades of professional performing. In addition to his own original material his catalog features classic crooners by the likes of Sinatra, Cole, and Fitzgerald, Classic Country songs performed by artists such as Johnny Cash, Ray Charles, Willie Nelson, Marty Robbins, Hank Williams and other greats. Elvis Presley Hits to Classic Rock Hits by artists such as Neil Young, Tom Petty, Bob Seger, the Eagles, the Beatles and more. From American Songbook Standards, Classic Country, Classic Rock, Rock’n Roll, Boogie Woogie, and love songs to ballads and folk songs by artists such as Cat Stevens and Jim Croce. Whether singing Bob Dylan’s works or songs of the Moody Blues Jonathan skillfully and respectfully interprets the songs with both reverence for the original and originality in his adaptations. Playing to crowds adeptly has made Jonathan Sarty a New England commodity, performing hundreds of shows a year regionally and throughout his homeland of New England. Whether performing with the Jonathan Sarty Band, his Cold River Radio Band, or as a solo performer, Jonathan is dedicated to his craft and to the song he is performing, never failing to put on a great show and please any crowd. 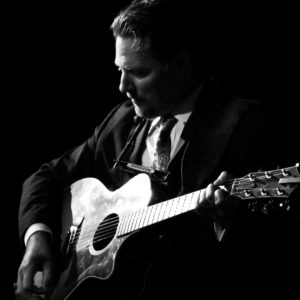